It is striking how many “gaps” (divergencies from norms) currently exist in economies and markets around the world. Which gaps will converge? Which will diverge further? Over what time frame? The answers to these questions will determine economic growth across countries and regions, as well as the performance of many financial markets. Five key factors are in play:

The upshot: Look for opportunities to take advantage of market volatility to add to desired positions.

Goldman Sachs estimates that 53% of the population of the four largest EU countries will have received at least one dose of a vaccine by the end of June, versus just 12% at the end of March. In contrast to the EU’s steady, favorable trend, many emerging markets (EMs)—especially India, Brazil, and Turkey—have disturbingly high rates of new infections and continue to lag in their vaccination rollouts, expanding that gap. 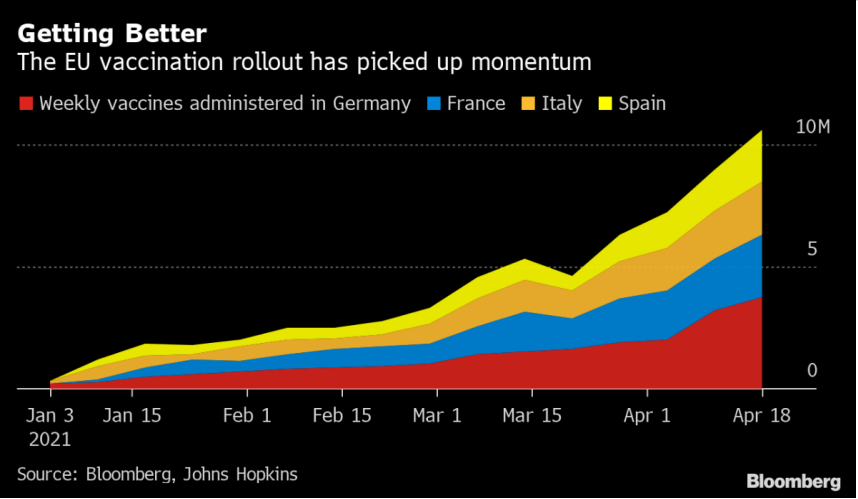 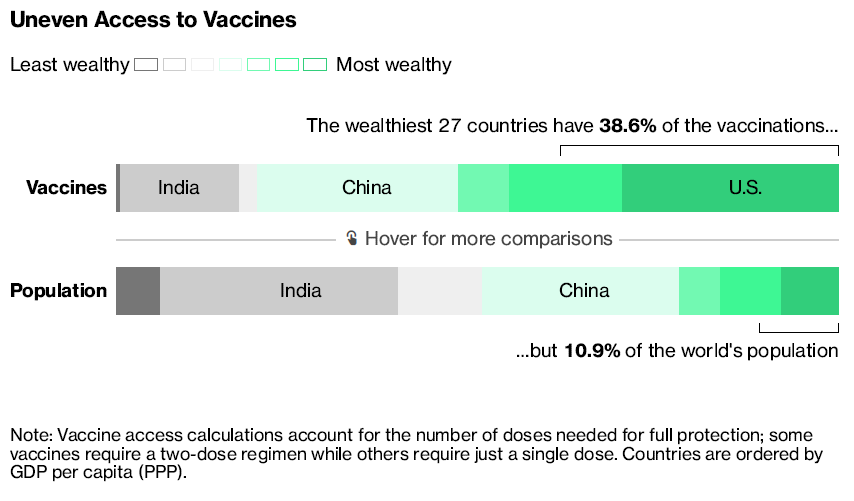 Where you live clearly matters! So far, more than 910 million people have been vaccinated globally and the U.S. has received 212 million of those doses. There is no doubt that vaccine distributions have favored the 27 wealthiest countries: They have received about 38% of all vaccinations even though they represent only 11% of the world’s population. (Bloomberg). This dichotomy is concerning, as COVID-19 variants and mutations are expected to increase more in countries with relatively low vaccination rates. In turn, the vaccination rates’ disparities present risk to asset performance by making it difficult to predict the economic trajectory of these countries.

The data from both India and Brazil bear this out. Given the recent spike in COVID-19 cases and more lockdowns in India, economic growth estimates are being lowered. This week, India announced over 295k record new cases and a record 2,023 deaths in one day. It is interesting to note that India is the world’s third-largest importer of oil; their impact on the global economy should not be underestimated. Similarly, Brazil recently reported a record number of COVID-19-related infections and deaths. Their economy greatly benefited in 1Q as restrictions were relaxed and mobility increased. But now 2Q estimates for Brazil’s economic growth have been lowered. These are examples of why economic forecasting—yet another gap—has become so difficult.

The U.S. economy continues to expand, perhaps reaching a peak growth rate in the current quarter, and should continue to grow briskly for the rest of 2021. We expect the U.S. economy to expand more rapidly than other economies in 1H due to our successful vaccine rollout. We expect this gap to begin to converge in 2H, starting with the EU. 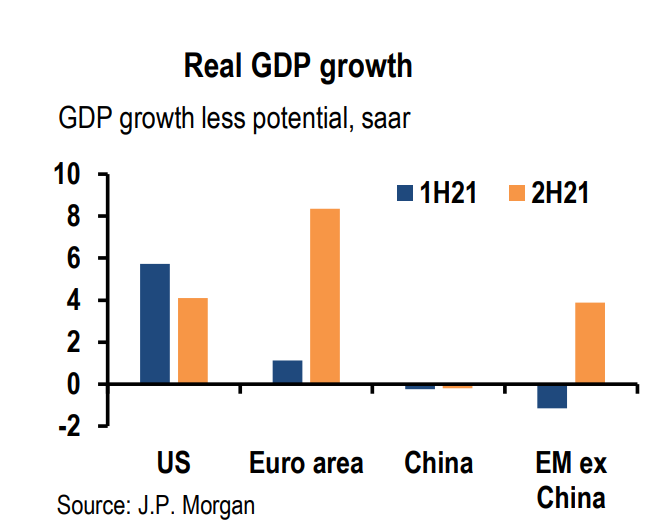 As the U.S. continues to “reopen,” its services sector should continue to close a chasm with the goods sectors. In March, sales at American restaurants and bars grew by 13.4%, compared to overall retail sales growth of 9.8%. As the sector expands, the overall unemployment rate might drop more quickly than expected. U.S. delinquency rates across consumer credit accounts, which are lower than pre-COVID-19 levels, should also help to spur economic growth. It is not surprising that in April, U.S. consumer confidence reached its highest level since the start of the pandemic. The reservoir of U.S. savings built up during the pandemic, along with increasing confidence, should lead to surprisingly strong levels of consumer spending.

Yet another impetus for U.S. economic growth could be a dramatic increase in domestic loan activity off a very low base: U.S. banks’ loans-to-deposits ratio is at its lowest level in 48 years. The strengthening of the U.S. economy was further confirmed by Thursday’s report of 547,000 new jobless claims, which was both below expectations and down from last week’s revised 586,000. On the other side of the pond, Europe could also see explosive growth in consumer spending, as household expenditures in Western EU dropped by 10–20% relative to disposable income during the pandemic. (JPM, April 16).

The strong U.S. economic data released on Friday confirmed that the U.S. economy continued to strengthen and that inflationary pressures continued to grow. Preliminary U.S. Manufacturing PMI (purchasing managers’ index) was 60.5 in April versus 59.1 in March. This survey showed record growth of factory production would have been more robust if raw materials and other inputs were available in a more timely manner. Input costs increased at the sharpest rate since July 2008. Severe supply shortages and rises in transportation costs were cited. Likewise, the U.S. Services PMI hit a record high of 63.1 in April from 60.4 in March. New home sales also surprised on the upside. March sales were 20.7% higher from February’s depressed level. U.S. stocks reacted very favorably to the very positive economic data. Cyclical and value stocks performed especially well, as did technology stocks.

Variability in economic growth rates is also reflected in variable inflation rates. Bottlenecks, supply chain disruptions, variable input costs, and pricing power could prove to diverge from expectations. The targeted nature of these inflationary pressures, along with their variable durations, makes it difficult to predict overall inflation rates. Shortages of semiconductor chips, especially for autos, could last as long as one year. These factors could especially affect sectors including technology, homebuilders, chemicals, basic materials, consumer goods, food and beverage companies, along with autos.

USD weakness could further add to inflationary pressures as imports become more expensive. In addition, the Chinese yuan continues to strengthen relative to the currencies of many of its trading partners. China exports a vast array of goods worldwide as a low-cost producer; some even characterized it as exporting deflation. Now China seems to be on the verge of exporting inflation. Even so, while a recent survey of U.S. consumers found that they expect a 3.7% rate of inflation over the next year, they also expect a much lower rate over the next five years. Evidently, they agree with Fed Chairman Powell that any inflationary spikes will be temporary. 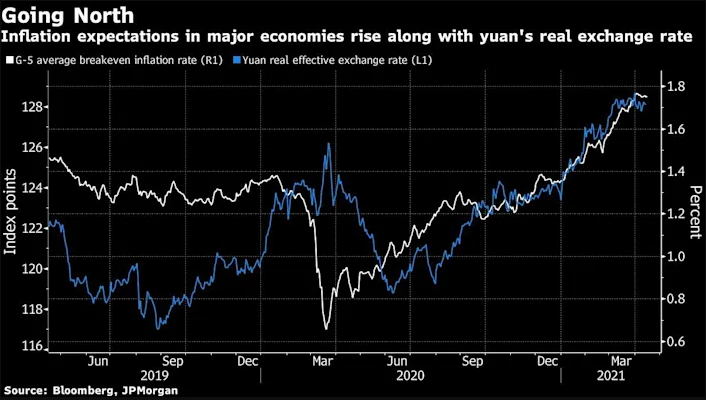 As uncertainties have mounted concerning the variability of economic growth and inflation rates, trading volume of U.S. stocks has been decreasing over the past few weeks. Measures of implied volatility have decreased for equities relative to interest rate volatility. Since the 10-year Treasury yield generally traded lower this week while remaining within a relatively narrow band, perhaps implied interest rate volatility will trend lower as well. This would be a positive for high-quality growth stocks.

Market breadth of U.S. equities recently hit multiyear highs, with fully 96% of stocks—the highest percentage since 2009—above their 200-day moving averages. Likewise, market breadth of EU stocks recently hit 85% (the highest since 2007). History suggests that once these levels are achieved, equities usually trade lower in the very short-term, but are higher on a one- to three-month time horizon. (JPM report. April 21). Similarly, S&P 500® selloffs seem to be triggered when that index trades 16% above its 200-day moving average (its present state). 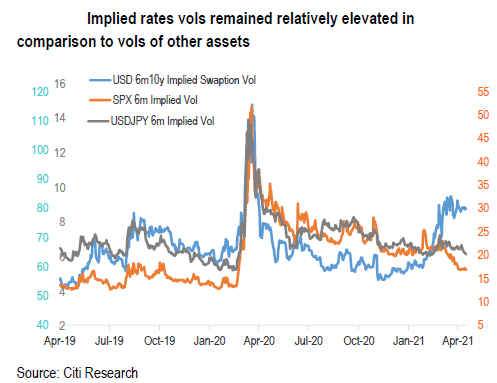 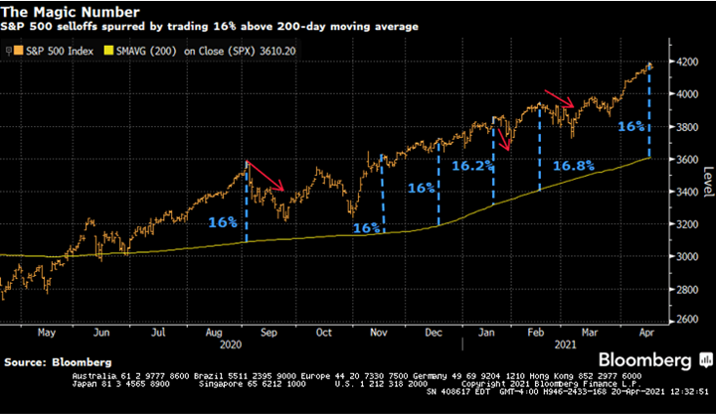 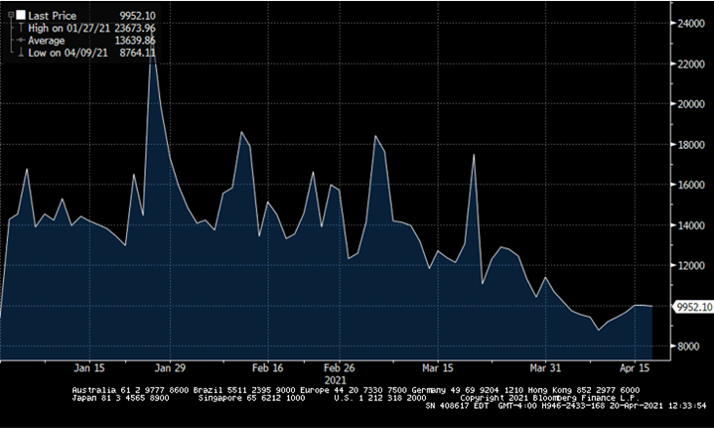 Indeed, any selloffs could prove to be good opportunities to add to positions of cyclical and value stocks. The “stay at home” stocks could continue to come under pressure. Netflix had disappointing subscriber numbers, and the stock was down at least 10%. This is a classic case of demand for a product being “pulled forward.” The big-cap quality growth stocks, on the other hand, are likely to have more predictable earnings and should continue to be core holdings.

Yet another concern for financial markets is potential tax increases. According to a Bloomberg report on Thursday, it is expected that President Biden will announce his proposal next week to massively raise U.S. capital gains tax rates to 39.6% for households earning more than $1 million per year. Combined with a 3.8% net investment tax on individuals with income of $200k or more ($250k or more for married couples filing jointly), this would bring the total capital gains tax to 43.4%. If these proposals were enacted, a negative short-term market reaction may be likely. Many analysts believe that estate tax increase proposals will be forthcoming at some point as well, although it is difficult to predict which proposed tax increases will be enacted.

Slower vaccination rates and increased mobility in certain countries may prolong a worldwide reopening. Lower vaccination rates coupled with the mobility of people will increase the risk of new variants and/or mutations. The more quickly the pace of vaccination rates increase globally, the more quickly cyclical and value stocks will appreciate and the more quickly interest rates will rise. Many market indicators point to a short term downturn in equity prices, but also to equity gains over a 1-3 month period. As economies continue to re-open, there is still a very strong possibility that the yield on 10-year Treasuries will exceed 2% this year, and the Fed has committed to letting inflation run as high as 2.5% in the belief that they can manage the rate. Depending on its composition, however, there is always the possibility that inflation expectations might also become more persistent and thus exacerbate upward pressure on prices. Friday’s strong U.S. economic data confirmed the re-opening “trade.”

The views and opinions included in these materials belong to their author and do not necessarily mirror the views and opinions of NewEdge Capital Group, LLC. The trademarks and service marks contained herein are the property of their respective owners. Unless otherwise specifically indicated, all information with respect to any third party not affiliated with NewEdge has been provided by, and is the sole responsibility of, such third party and has not been independently verified by NewEdge, its affiliates or any other independent third party. No representation is given with respect to its accuracy or completeness, and such information and opinions may change without notice. Information shown is as of the date of this letter, unless otherwise noted. All data are subject to change without notice.

These materials do not constitute an offer or solicitation in any jurisdiction to any person or entity. This communication is not intended to, and should not, form a primary basis for any investment decision. The information and analyses contained in herein are not intended as tax, legal, regulatory, accounting or investment advice. Any such information contained herein is general and educational in nature and should not be construed as advice. Please consult your own tax advisor for matters involving taxation and tax planning and your attorney for matters involving trusts, estate planning, charitable giving, philanthropic planning and other legal matters.

Investing involves risk, including possible loss of principal. Past performance is no guarantee of future results.

This report has been prepared solely for your confidential use. Our arrangements with third-party data providers may limit the redistribution of certain information contained in this report beyond our direct clients. Accordingly, no part of this report may be redistributed without our written permission.